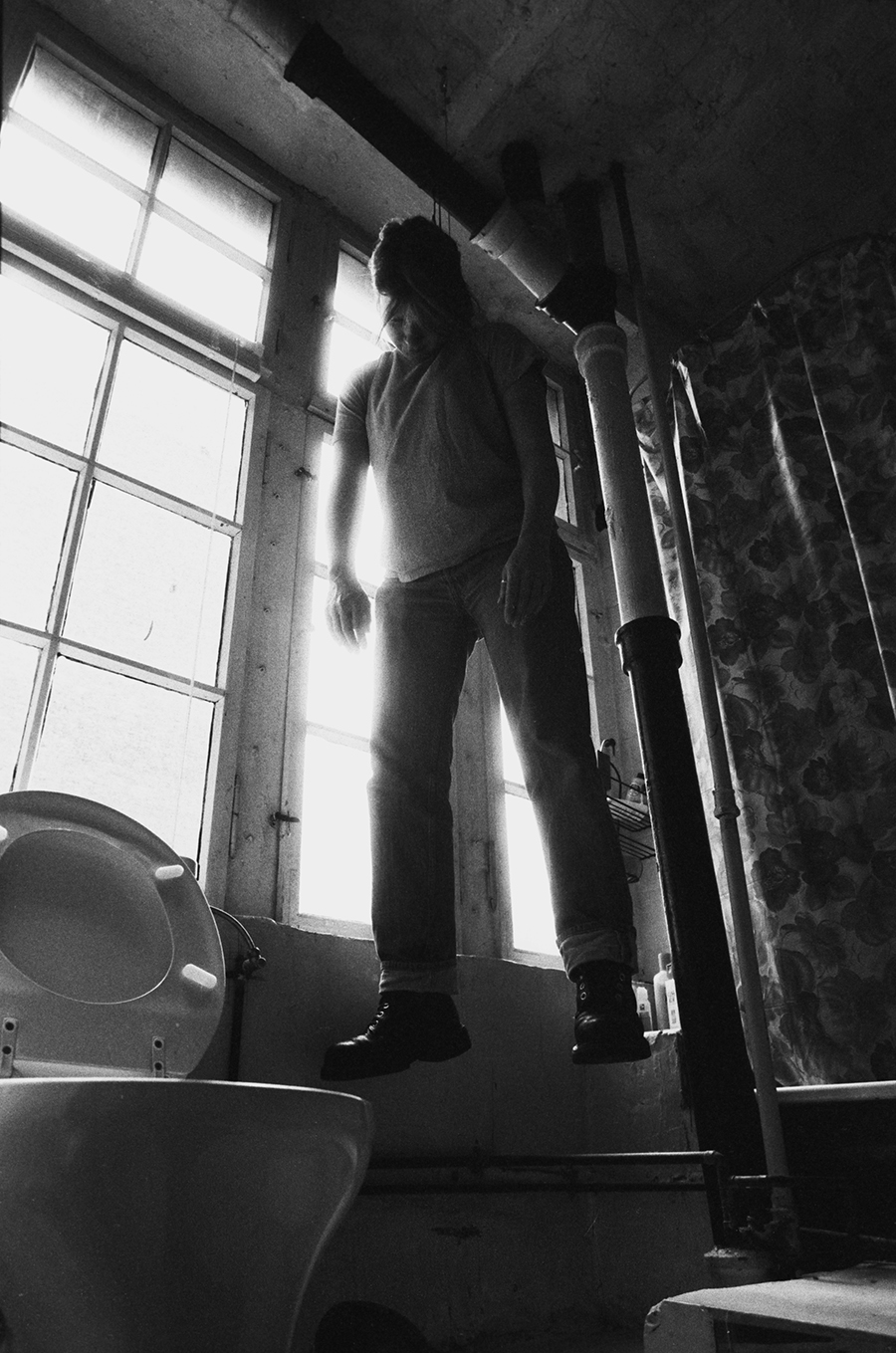 Sarah Kane, 1971-1999, British playwrighter, hung herself in the bathroom. Only 28 years of age, she became instantly famous for a plays and writings provoking scandals all over the world due to explicit decriptions of violence and destruction.
< 2/11 >

WAYS TO EXIT FROM THE WORLD

The necessity of the question why, i.e. the concept that suicide actually has a meaning, stands in contrast to the freedom of interpretation. (Vera Lind in "Selbstmord in der frühen Neuzeit - Diskurs, Lebenswelt und kultureller Wandel", Göttingen, 1999)

From the moment of birth, death keeps retreating into a distance that increasingly needs to be pushed even further away. Children and juveniles still have a curiosity and openness towards the dark subject, which well-situated adults tend to have lost. The idea of letting go becomes noticeably more difficult with the accumulation of property. A child's imagination, perhaps because of its greater mobility, can picture these subjects, even nothingness, more directly; the latter especially when boundless young desire becomes thwarted by inhumanly large barriers. In a few of such cases, stopping something can be a more appealing solution than continuing it. In the satiated, mainstream-oriented course of older age, death becomes damnable. Yet someone who lives on the outer fringes of the mainstream also has a clearer focus on death. Not one's own death, however, but rather the fatalities in one's environment often manage to barge up against an individual or a group with unsuspected force. If a loved, admired or venerated life is extinguished, we are forced to momentarily cease all motion. A rite of departure forces us to break our flow. The stream parts and presents a glance at nothingness, or a distant realm, which waits for us with deadly certainty.

The passing of those who have taken their death into their own hands usually results in shock, which becomes all the greater the younger the person is, or the nearer the person is to one's own age and sex. Everyone who has voluntarily departed from life leaves behind a bad taste in those left behind, and for those of us who have for decades been conditioned by Christian schooling, there often remains an incomprehensible issue of guilt, which hovers above us like a dark dream. Behind the unsolvable questions of guilt and motivation flourish emotions that are rarely pushed into the foreground: admiration for the courage of the deceased, an encounter with one's own longing for death, or a powerful rage at having been abandoned. Moral contempt and incomprehension become the security vests that prevent an unbiased recognition of the core of one's own involvement, and they ultimately offer great protection from imaginary, unsolvable questions of guilt.

Someone who voluntarily plays the role of women who have committed suicide can trigger very contrasting emotions: from fright to anger and nebulous interest all the way to unrestrained excitement. Between consternation and a kind of fear-cloaking lasciviousness lies the possibility of letting the nebulous interest grow into a significant, eminently explorable experience, which could yield insights on the path to fulfilling life's goals - not only for the bereaved and shocked, but perhaps also those feasting on sensationalism. The artist Claudia Reinhardt is posing herself in the role of women at the moment of their deaths. Most of the death methods of the artists and others portrayed here involve the act of choice. In this collection of twelve fatalities, Pierre Molinier presents an extreme: at the age of 76 he stages his death as the climax of his narcissistic-voluptuous creativity in front of a mirror, to prevent an operation that would have sealed his most pleasurable orifice, his anus. Perhaps Diane Arbus also acted with narcissism, it being rumored that she photographed her own death with a remote release. According to numerous biographical sketches, her life, as well as the lives of Sarah Kane, Unica Zürn, Sylvia Plath and Anne Sexton, is perforated by suffering, a tendency towards depression that accompanies the death wish, which weaves through them like a red thread. The same could be said about Ingeborg Bachmann and Adelheid Duvanel, judging by their biographies. However, their deaths, burning in bed and freezing in a forest, seem to have been less premeditated. They are more like tragic accidents. In the case of Duvanel there were unusually chilly weather factors on that night in June, which led to her dying of cold. Clara Immerwahr poses another extreme in this collection of the voluntarily departed. Today her death is interpreted as a political statement and, unlike all the others here, she was not an artist. Nonetheless she occupies a place as an outsider - after all, she was the first woman to receive an advanced degree in chemistry in Germany.

Nowadays Clara Immerwahr's death is perceived with a luster that seems to correspond to her mellifluous name. She killed herself with her husband's military pistol in their backyard, after her husband, the chemist Fritz Haber, the "father of gas warfare" - who had long ago branded her as a traitor to her country - had traveled to the war front in preparation for a gas attack. Although she had publicly criticized this move, she could not prevent it, but made a clear statement through her death. That is how a critical public has interpreted it in this age. Back then it was just the act of a pitiable, sick woman. Since November 2000, the Clara Immerwahr Mentoring Project has supported women in chemistry in her honor, chemistry being a field dominated by men to this day. The fatalities of the other people mentioned here also make statements, but to put them in words and find good contemporary analyses is much more difficult. Their significance remains more subtle, and interpretations attach themselves to other interpretations, without coming to a conclusion that can be deciphered occasionally: psychoses, depressions and anxieties motivated these women towards their last steps, if they did not drive them there entirely.

These conclusions, which refer to mentally ill dispositions, are sharply contradicted by Claudia Reinhardt's photos. Almost life-size, the prints show us the women in action. Not only Clara Immerwahr is depicted resolutely, with determination. All the women shown by Claudia Reinhardt are not victims but agents, resolute and determined. They sit, lie, jump or hang themselves right in front of our eyes and initiate a kind of monologue inside us. Words arise inside us, the affected observers. As far as we can see, the women pictured here are not scared or sad. They have made a decision that we will have to live with - in the case of Molinier and perhaps Diane Arbus, not without a trace of narcissistic self-love.

If anyone asks how a woman who hanged herself - in this collection, the theater artist Sarah Kane - can evoke the association of words, even if her own words obviously remain stuck in her throat, then the following may be an answer: The black and white photo is the first in the series, the beginning of the artistic confrontation. Maybe it signifies the shock that can follow an encounter with a death like the one described above, a shock experienced by many people facing death, especially suicide. A question to the photographer reveals that she heard of Sarah Kane's death on the day after dreaming that all her teeth were falling out. In her family this is a symbol of an impending accident or death. Here the dream and the occurrence of death are an indication of Claudia Reinhardt's entanglement in the subjects of death and shock. In the work that followed, she surpassed the event and, as written here, new paths have been opened - for a life with death, or a continued life beyond.